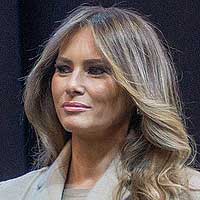 US’ First Lady Melania Trump underwent an embolization medical procedure to treat a benign kidney condition at Walter Reed National Military Medical Center. President Donald Trump’s wife Melania Trump is reported to be recovering without any trouble now and will likely remain there for the duration of the week.

“The procedure was successful and there were no complications,” the White House said in a statement.

In the late afternoon, the president flew by helicopter to Walter Reed to visit the first lady for about an hour before returning to the White House. “Heading over to Walter Reed Medical Center to see our great First Lady, Melania,” Mr. Trump said on Twitter. “Successful procedure, she is in good spirits. Thank you to all of the well-wishers!”

Dr. Joseph A. Vassalotti, the chief medical officer at the National Kidney Foundation, said his guess was that Mrs. Trump had either a benign tumor known as an angiomyolipoma or a bleeding cyst. “It sounds like it was a benign tumor,” he said.