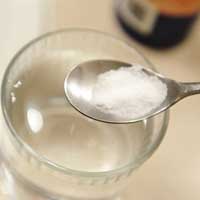 A daily dose of baking soda may help reduce the destructive inflammation of autoimmune diseases like rheumatoid arthritis, scientists say. They have some of the first evidence of how the cheap, over-the-counter antacid can encourage our spleen to promote instead an anti-inflammatory environment that could be therapeutic in the face of inflammatory disease, Medical College of Georgia scientists report in the Journal of Immunology.

They have shown that when rats or healthy people drink a solution of baking soda, or sodium bicarbonate, it becomes a trigger for the stomach to make more acid to digest the next meal and for little-studied mesothelial cells sitting on the spleen to tell the fist-sized organ that there’s no need to mount a protective immune response.

Drinking baking soda, the MCG scientist — Dr. Paul O’Connor — think, tells the spleen – which is part of the immune system, acts like a big blood filter and is where some white blood cells, like macrophages, are stored – to go easy on the immune response.

“Certainly drinking bicarbonate affects the spleen and we think it’s through the mesothelial cells,” O’Connor says.

In the spleen, as well as the blood and kidneys, they found after drinking water with baking soda for two weeks, the population of immune cells called macrophages, shifted from primarily those that promote inflammation, called M1, to those that reduce it, called M2. Macrophages, perhaps best known for their ability to consume garbage in the body like debris from injured or dead cells, are early arrivers to a call for an immune response.

“You are just pushing a recovery by giving an anti-inflammatory stimulus,” he says, in this case, away from harmful inflammation.

The research was funded by the National Institutes of Health.