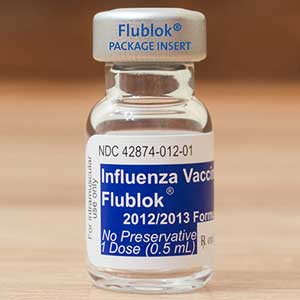 The U.S. Food and Drug Administration announced that it has approved Flublok, the first trivalent influenza vaccine made using an insect virus (baculovirus) expression system and recombinant DNA technology. Flublok is approved for the prevention of seasonal influenza in people 18 through 49 years of age.

Unlike current flu vaccines, Flublok does not use the influenza virus or eggs in its production. Flublok?s novel manufacturing technology allows for production of large quantities of the influenza virus protein, hemagglutinin (HA) ? the active ingredient in all inactivated influenza vaccines that is essential for entry of the virus into cells in the body.

The majority of antibodies that prevent influenza virus infection are directed against HA. While the technology is new to flu vaccine production, it is used to make vaccines that have been approved by the FDA to prevent other infectious diseases.

?This approval represents a technological advance in the manufacturing of an influenza vaccine,? said Karen Midthun, M.D., director of the FDA?s Center for Biologics Evaluation and Research. ?The new technology offers the potential for faster start-up of the vaccine manufacturing process in the event of a pandemic, because it is not dependent on an egg supply or on availability of the influenza virus.?

Each year, the FDA, World Health Organization, the Centers for Disease Control and Prevention and other public health experts collaborate on the review of influenza disease surveillance and laboratory data collected from around the world in an effort to identify strains that may cause the most illness in the upcoming season. Based on that information and on the recommendations of the FDA?s Vaccines and Related Biological Products Advisory Committee, the FDA selects the different influenza strains each year that manufacturers should include in their vaccines for the U.S. population for the upcoming influenza season. The closer the match between the circulating strains causing disease and the strains in the vaccine, the better the protection against influenza.

As it does with all influenza vaccines, the FDA will evaluate Flublok annually prior to use by the public each flu season. The recombinant HA proteins produced in the baculovirus expression system and included in Flublok will be assessed by the FDA.

The effectiveness of Flublok was evaluated in a study conducted at various sites in the United States that compared the use of Flublok in about 2,300 people to a placebo that was given to a control group of similar size. Flublok was about 44.6 percent effective against all circulating influenza strains, not just the strains that matched the strains included in the vaccine.

Flublok?s safety evaluation was conducted in a study of about 2,500 people who were vaccinated with Flublok. The most commonly reported adverse events included pain at the site of injection, headache, fatigue and muscle aches, events also typical for conventional egg-based, inactivated influenza vaccines.

Flublok has a shelf life of 16 weeks from the date of manufacture. Health care providers should check the expiration date before administering Flublok.

Flublok is manufactured by Protein Sciences Corp, of Meriden, Conn.

Flu season tough for older people this year in US