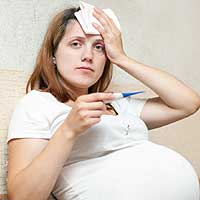 The malaria disease significantly increases the risk of miscarriage, but that treating with antimalarial drugs is relatively safe and reduces this risk in pregnant women expecting their new born babies.

This is the largest ever study to assess the effects of malaria and its treatment in the first trimester of pregnancy, carried out at the Shoklo Malaria Research Unit (SMRU), in Thailand and funded by the Wellcome Trust.

The researchers examined medical records of women attending the unit’s antenatal clinic over the 25 years since it was founded.

Malaria kills around one million people each year, mainly children and pregnant women. Malaria in pregnancy is a major cause of maternal mortality, and low birth weight which predisposes to neonatal mortality.

The disease is caused by infection with the malaria parasite, with two major species Plasmodium falciparum and Plasmodium vivax commonly infecting pregnant women.

The most effective drug for treating malaria is artemisinin, which is usually given as part of a combination therapy, a cocktail of drugs aimed at treating the disease whilst reducing the risk of the emergence of parasites resistant to one particular drug. Artemisinin combination therapies (ACT) are recommended by the World Health Organization for the treatment of malaria except in the first trimester. This is because animal studies have indicated that the drugs can be toxic to embryos.

Dr Jimmy Whitworth, Head of International Activities at the Wellcome Trust, says: “This is a very important observational study on the risks of treating malaria in women in early pregnancy, a key high-risk group for this infection.