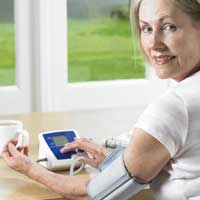 “We encourage patients to monitor their blood pressure at home if they have been diagnosed with hypertension, but not every high blood pressure reading is an emergency,” said lead study author Clare Atzema, MD, an emergency physician at Sunnybrook Health Sciences Centre and a scientist at the Institute for Clinical Evaluative Sciences in Toronto, Ontario, Canada.

“Some of the increase in emergency visits is due to the aging of our population, but we suspect that recent public education campaigns recommending home blood pressure monitoring may have inadvertently contributed to the rise in visits for hypertension.”

During the study period in which visits to Ontario emergency departments for hypertension increased from 15,793 to 25,950 per year, the proportion of patients admitted to the hospital as a result decreased from 9.9 percent to 7.1 percent.

Among the patients whose emergency department visit ended in admission to the hospital, the most frequent hospital diagnoses were stroke, renal failure and heart failure. The proportion of patients arriving via ambulance increased over time, from 10.7 percent to 14.3 percent.

“Stroke remains a huge killer and we do appreciate patients with hypertension being so conscientious about monitoring their readings,” said Dr. Atzema. “Patients should be aware that unless their high blood pressure coincides with symptoms of a medical emergency, such as chest pain, severe headache, nausea or shortness of breath, they probably do not need to visit the ER. We of course encourage them to follow up as soon as possible with their regular physician. If there is any doubt, come to the emergency department: we would rather have you come without an emergency than stay home with one.”