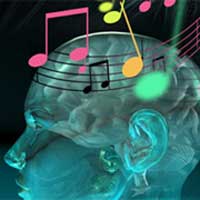 Researchers from Finland found that if stroke patients listened to music for a couple of hours a day, their verbal memory and focused attention recovered better and they had a more positive mood than patients who did not listen to anything or who listened to audio books.

This is the first time such an effect has been shown in humans and the researchers believe it has important implications for clinical practice.

“As a result of our findings, we suggest that everyday music listening during early stroke recovery offers a valuable addition to the patients’ care especially if other active forms of rehabilitation are not yet feasible at this stage-by providing an individually targeted, easy-to-conduct and inexpensive means to facilitate cognitive and emotional recovery”, says Teppo S?rk?m?, the first author of the study.

S?rk?m?, a PhD student at the Cognitive Brain Research Unit, Department of Psychology, at the University of Helsinki and at the Helsinki Brain Research Centre, focused on patients who had suffered a stroke of the left or right hemisphere middle cerebral artery (MCA). He and his colleagues recruited 60 patients to the single-blind, randomised, controlled trial between March 2004 and May 2006 and started to work with them as soon as possible after they had been admitted to hospital.

Most of the patients had problems with movement and with cognitive processes, such as attention and memory, as a result of their stroke. The researchers randomly assigned them to a music listening group, a language group or a control group. During the next two months the music and language groups listened daily to music they chose themselves (in any musical genre, such as pop, classical, jazz or folk) or to audio books respectively, while the control group received no listening material. All groups received standard stroke rehabilitation. The researchers followed and assessed the patients up to six months post-stroke, and 54 patients completed the study.

We found that three months after the stroke, verbal memory improved from the first week post-stroke by 60 percent in music listeners, by 18 percent in audio book listeners and by 29 percent in non-listeners. Similarly, focused attention-the ability to control and perform mental operations and resolve conflicts among responses-improved by 17 percent in music listeners, but no improvement was observed in audio book listeners and non-listeners. These differences were still essentially the same six months after the stroke, S?rk?m? says.

In addition, the researchers found that the music listening group experienced less depressed and confused mood than the patients in the control group.

Other research has shown that during the first weeks and months after stroke, the patients typically spend about three-quarters of their time each day in non-therapeutic activities, mostly in their rooms, inactive and without interaction, even although this time-window is ideal for rehabilitative training from the point of view of brain plasticity. Our research shows for the first time that listening to music during this crucial period can enhance cognitive recovery and prevent negative mood, and it has the advantage that it is cheap and easy to organise, S?rk?m? concludes.

Glucosamine no better than placebo in reducing hip pain