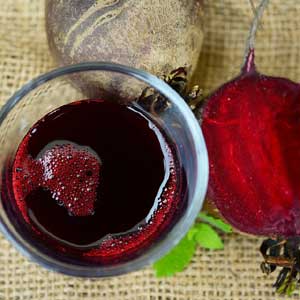 Drinking beetroot juice boosts your stamina and could help you exercise for up to 16% longer.

A University of Exeter led-study shows for the first time how the nitrate contained in beetroot juice leads to a reduction in oxygen uptake, making exercise less tiring.

The study reveals that drinking beetroot juice reduces oxygen uptake to an extent that cannot be achieved by any other known means, including training.

The research team believes that the findings could be of great interest to endurance athletes. They could also be relevant to elderly people or those with cardiovascular, respiratory or metabolic diseases.

The research team conducted their study with eight men aged between 19 and 38.

They were given 500ml per day of organic beetroot juice for six consecutive days before completing a series of tests, involving cycling on an exercise bike.

On another occasion, they were given a placebo of blackcurrant cordial for six consecutive days before completing the same cycling tests.

After drinking beetroot juice the group was able to cycle for an average of 11.25 minutes, which is 92 seconds longer than when they were given the placebo. This would translate into an approximate 2% reduction in the time taken to cover a set distance.

The group that had consumed the beetroot juice also had lower resting blood pressure.

The researchers are not yet sure of the exact mechanism that causes the nitrate in the beetroot juice to boost stamina.

However, they suspect it could be a result of the nitrate turning into nitric oxide in the body, reducing the oxygen cost of exercise.

The research was carried out by the University of Exeter and Peninsula Medical School and published in the Journal of Applied Physiology.

The research team now hopes to conduct further studies to try to understand in more detail the effects of nitrate-rich foods on exercise physiology.

Corresponding author of the study, Professor Andy Jones of the University of Exeter’s School of Sport and Health Sciences, said: “Our study is the first to show that nitrate-rich food can increase exercise endurance. We were amazed by the effects of beetroot juice on oxygen uptake because these effects cannot be achieved by any other known means, including training. I am sure professional and amateur athletes will be interested in the results of this research. I am also keen to explore the relevance of the findings to those people who suffer from poor fitness and may be able to use dietary supplements to help them go about their daily lives.”

This study follows research by Barts and the London School of Medicine and the Peninsula Medical School (published in February_2008 in the American Heart Association journal Hypertension), which found that beetroot juice reduces blood pressure.

Eye test for early detection of Alzheimer’s and Down syndrome