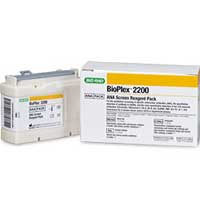 Bio-Rad BioPlex 2200 HIV Ag-Ab assay – the first FDA-approved diagnostic that differentiates between HIV-1 antibodies, HIV-2 antibodies, and HIV-1 p24 antigen in human serum or plasma specimens, now available in US. Two major types of HIV have been identified: HIV-1 and HIV-2. HIV-1 is responsible for most HIV infections throughout the world.

HIV-2 is found primarily in West Africa; however, cases of HIV-2 infection have been identified in the United States.

HIV-1 and HIV-2 are similar, but distinct viruses.

The Bio-Rad BioPlex 2200 HIV Ag-Ab assay is to aid in the diagnosis of infection with HIV-1 and/or HIV-2, including acute HIV-1 infection. It may be used in adults, children two years of age and older, as well as in pregnant women.

The assay may also be used to screen organ donors for HIV-1/2 when the blood specimen is collected while the donor’s heart is still beating. However, the assay is not approved for use in screening blood or plasma donors, except in urgent situations where traditional licensed blood donor screening tests are unavailable or their use is impractical.

This approval provides healthcare professionals another option for the diagnosis of HIV infections.

The ability to diagnose HIV infection early and differentiate between types of infection is important in the care of individuals as both diseases exhibit the same symptoms but progress at different rates.

The new assay is manufactured by Bio-Rad Laboratories, Inc., based in Hercules, California.