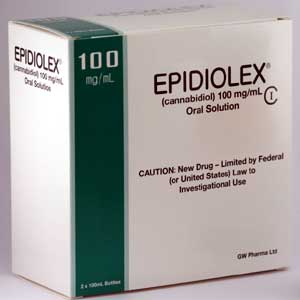 The U.S. Food and Drug Administration approved Epidiolex (cannabidiol) [CBD] oral solution for the treatment of seizures associated with two rare and severe forms of epilepsy, Lennox-Gastaut syndrome and Dravet syndrome, in patients two years of age and older.

This is the first FDA-approved drug that contains a purified drug substance derived from marijuana.

It is also the first FDA approval of a drug for the treatment of patients with Dravet syndrome.

Cannabidiol – CBD is a chemical component of the Cannabis sativa plant, more commonly known as marijuana. However, CBD does not cause intoxication or euphoria (the “high”) that comes from tetrahydrocannabinol (THC).

It is THC (and not CBD) that is the primary psychoactive component of marijuana.

Because of the adequate and well-controlled clinical studies that supported this approval, prescribers can have confidence in the drug’s uniform strength and consistent delivery that support appropriate dosing needed for treating patients with these complex and serious epilepsy syndromes.

Dravet syndrome is a rare genetic condition that appears during the first year of life with frequent fever-related seizures (febrile seizures).

Children with Dravet syndrome typically experience poor development of language and motor skills, hyperactivity and difficulty relating to others.

Lennox-Gastaut syndrome begins in childhood. It is characterized by multiple types of seizures.

People with Lennox-Gastaut syndrome begin having frequent seizures in early childhood, usually between ages 3 and 5.

More than three-quarters of affected individuals have tonic seizures, which cause the muscles to contract uncontrollably.

Many also have delayed development of motor skills such as sitting and crawling. Most people with Lennox-Gastaut syndrome require help with usual activities of daily living.

Epidiolex, taken along with other medications, was shown to be effective in reducing the frequency of seizures when compared with placebo.

The most common side effects that occurred in Epidiolex-treated patients in the clinical trials were: sleepiness, sedation and lethargy; elevated liver enzymes; decreased appetite; diarrhea; rash; fatigue, malaise and weakness; insomnia, sleep disorder and poor quality sleep; and infections.

Epidiolex must be dispensed with a patient Medication Guide that describes important information about the drug’s uses and risks.

The FDA granted approval of Epidiolex to GW Research Ltd.

ASD or autism increases in children of diabetic mothers