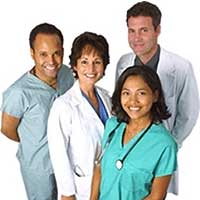 The Indian Government, exercising powers conferred upon it by the provisions of the Indian Medical Council Act, 1956, has recognized Post Graduate medical qualifications being awarded in Australia, Canada, New Zealand, United Kingdom and United States of America, with the condition that these degrees should be recognized in the respective country for enrolment of medical practitioners in the concerned specialties.

This recognition has been notified in the Official Gazette on 10th_March 2008.

The National Rural Health Mission (NRHM) has been operationalized with the main aim of providing accessible and reliable primary healthcare facilities especially to the poor and the vulnerable sections of the population. However, the vast stretches of the countryside are not well equipped with health facilities, doctors and para medical staff, creating serious imbalances in the health sector.

As per Medical Council of India (MCI), the total number of registered allopathic doctors in the country is 6,83,582. Thus, the allopathic doctor ? population ratio works out to 1:1634. In addition, there are more than 6 lakh practitioners of Indian Systems of Medicine and Homoeopathy in the country. Taking all these numbers together, the doctor ? population ratio comes to 1:870.

There are 271 medical colleges in the country, out of which 138 are in the Government sector and remaining 133 in the private sector. The MBBS students intake capacity of these medical colleges is about 31,172 and the number of seats available in various Post Graduate medical courses is approximately 11,005 annually.

It is clear from the above statistics that the country is in dire need of medical specialists to cater to the increasing demands of public healthcare in rural and urban areas. The various strategies adopted to overcome this problem includes augmenting the capacity of existing medical institutions and encouraging setting up of new medical colleges and introduction of new Post Graduate courses. As increasing the intake capacity and availability of medical specialists cannot be achieved immediately, the Union Government has now decided to give recognition to acclaimed Post Graduate medical degrees awarded in English speaking countries.

This recognition would not only facilitate Indian students to pursue their Post Graduate medical studies in these foreign countries but will also make them eligible to practice medicine in specialized fields back in India. In addition, there are many Indian citizens who are living abroad, possessing these foreign Post Graduate medical degrees and are willing to return to India. Recognition of these degrees has now cleared the way for these Indian citizens to come back to India and pursue their medical profession.

Non Resident Indians and Overseas Citizens of India in medical teaching profession can also come on sabbatical or as visiting faculty in medical colleges in India.

In April 2015, the Delhi High Court sought response from the Indian Government and Medical Council of India (MCI) on a plea seeking recognition of foreign post-graduate medical degrees in India.

A bench of Chief Justice G Rohini and justice Rajiv Sahai Endlaw asked MCI and Health Ministry to file counter affidavit on the plea filed by four doctors with post-graduate qualification from the Zheng Zhou University at China.

Advocate Prashant Bhushan, appearing for the doctors, contended that under the existing provisions of law and rules of MCI, one cannot practice in India as specialist doctor with a foreign degree.

The bench, however, asked the doctors’ counsel that “can there be any bar on declaring some doctor as specialist after having a foreign post-graduate degree.”

Opposing the petitioners’ contention, MCI’s counsel said under the existing rule only professionals with foreign primary medical qualification was registered in Indian Medical Register or the State Medical Register after they qualified a screening test.