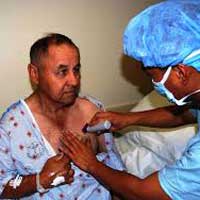 Modifying the immune system of a patient with heart failure reduces the patient’s risk of death and the need for hospitalization, according to research published in recent edition of The Lancet.

“Immune modulation therapy could provide physicians with a new way of treating large numbers of patients with heart failure,” said Dr. Guillermo Torre-Amione, principal investigator of the study and cardiologist at the Methodist DeBakey Heart Center in Houston.

Activation of the immune system in patients with systolic heart failure increases the concentration of molecules that can injure the heart in a way that leads to heart failure. New research shows that modification of this immune response is an appealing potential therapy for many patients with heart failure. The technique involves intentionally damaging some of the patient’s blood cells to trick the body into producing anti-inflammatory cells that heal the damaged heart.

In patients with no history of heart attack, immune modulation therapy (IMT) showed a 26 percent reduction in the risk for death and rehospitalization. In those with Stage 2 NYHA heart failure, those risks were reduced by 39 percent.

“While further research is needed, the ability to change or modulate the patient’s immune response has now been shown to be attainable as well as successful in treating certain stages of heart failure,” Torre said.

In the ACCLAIM trial, researchers conducted a double-blind, placebo-controlled study of a device-based IMT on 2,246 patients. All the patients had New York Heart Association (NYHA) functional class II-IV chronic heart failure, left ventricular systolic dysfunction, and hospitalization for heart failure or intravenous drug therapy in an outpatient setting within the past 12 months. Patients were randomized to receive IMT (1,213) or placebo (1,213). The study went on until all patients had been treated for at least 22 weeks. The primary endpoint was death (from any cause) or subsequent first hospitalization for cardiovascular reasons.

During a mean follow-up of 10.2 months, there were 399 primary events in the IMT group and 429 in the placebo group, giving a reduction of risk in the IMT group of 8 percent. However, in two prespecified subgroups of patients ? those with no history of heart attack (919) and those with NYHA II heart failure (619), IMT was associated with a 26 percent and 39 percent reduction in the risk of primary events, respectively.