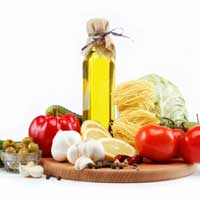 A Mediterranean diet, high in fruit, vegetables, fish and unrefined foods, is linked to a lower risk of heart attack and stroke in people who already have heart disease, according to a study of over 15,000 people in 39 countries around the world.

The research also showed that eating greater amounts of healthy food was more important for these people than avoiding unhealthy foods, such as refined grains, sweets, desserts, sugared drinks and deep-fried food – a “Western” diet.

The study, which is published in the European Heart Journal, showed that for every 100 people eating the highest proportion of healthy “Mediterranean” foods, there were three fewer heart attacks, strokes or deaths compared to 100 people eating the least amount of healthy foods during nearly four years of follow-up from the time the participants joined the study.

Professor Ralph Stewart, from Auckland City Hospital, University of Auckland, New Zealand, who led the study, said: “After adjusting for other factors that might affect the results, we found that every one unit increase in the Mediterranean Diet Score was associated with a seven percent reduction In the risk of heart attacks, strokes or death from cardiovascular or other causes in patients with existing heart disease. In contrast, greater consumption of foods thought be less healthy and more typical of Western diets, was not associated with an increase in these adverse events, which we had not expected.”

The findings were consistent across all the geographical regions involved in the study.

Antibiotics may have adverse impact on immune system of children