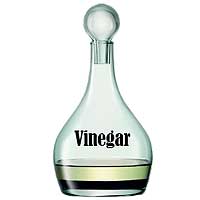 Vinegar is the perfect ingredient for making tangy sauces and dressings. Now, researchers report that the popular liquid could also help fight ulcerative colitis, an inflammatory bowel disease that research suggests is related to the gut microbiome. They found that vinegar suppressed inflammation-inducing proteins while improving the gut’s bacterial makeup in mice.

Ulcerative colitis is a chronic condition that affects millions of people around the world. Although its cause isn’t completely understood, research suggests that bacteria in the gastrointestinal tract play an important part.

People with the condition experience repeated inflammation of the large intestine’s lining, which can cause ulcers, abdominal pain, diarrhea and other symptoms. At least one recent study suggested that vinegar, which has been used in traditional medicine for centuries, might be effective against ulcerative colitis.

The researchers tested vinegar and its main ingredient, acetic acid, in a mouse model of ulcerative colitis.

Giving the mice either substance by adding it in small amounts to their drinking water significantly reduced symptoms of the condition.

An analysis of mouse stool samples showed that treated animals had higher levels of bacteria, such as Lactobacillus and Bifidobacteria.

Other studies have found these bacteria to be beneficial to mice with colitis-like symptoms.

Treatment also lowered the levels of proteins that induce potentially damaging inflammation in the gut.

The researchers say further work would be needed to determine vinegar’s effects on ulcerative colitis in humans.