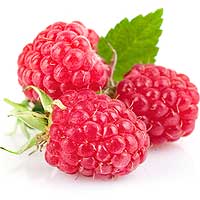 Components in red raspberries may have anti-inflammatory, anti-oxidative and metabolic stabilizing activity, according to a comprehensive review of the available scientific literature. These properties shed light on the potential role of red raspberries in helping to reduce the risk of metabolically-based chronic diseases, including cardiovascular disease, diabetes mellitus, obesity, and Alzheimer’s disease: all of which share critical metabolic, oxidative, inflammatory links.

Red raspberries contribute a number of valuable essential nutrients, including providing an excellent source of vitamin C and nine grams of fiber per cup. They are also among the few plant foods that provide a source of ellagitannins and anthocyanins in the same package. The evidence is suggesting that the action of these nutrients and phytochemicals in the body hold the key to red raspberry’s health promoting properties.

“Turns out what is good for the heart, is also good for the brain. That is what is particularly interesting about the research on red raspberries – their potential to help reduce factors contributing to metabolic syndrome which has implications for diabetes development and overall cardiovascular and brain health,” says Britt M. Burton-Freeman, PhD, MS of the Center for Nutrition Research, Institute for Food Safety and Health, Illinois Institute of Technology, and lead author of the paper.

Heart disease remains the leading cause of death, accounting for 17.5 million deaths a year globally. While lifestyle factors (healthy diet, exercise, not smoking) have been well researched in reducing the risk of cardiovascular disease, emerging research shows a major underlying cause is cellular/tissue dysfunction and damage caused by excess oxidative stress and inflammation. Animal and cellular studies have shown that after red raspberry exposure or feeding, ellagic acid, the primary breakdown product of ellagitannins, can reduce oxidative stress and inflammation. While these studies show the potential to help decrease atherosclerosis development, increase vasodilation and lower blood pressure, the next step is to verify and validate this effect in humans.

Recent statistics indicate that approximately 29.1 million people or 9.3% of the U.S. population has diabetes. Insulin resistance has been recognized as a major risk factor for developing diabetes and precipitates many of the risk factors of cardiovascular disease.

In the review of the scientific literature, limited studies suggests that different polyphenolic components of red raspberries have biological activity that could be clinically relevant in reducing disease risk and or management of diabetes, including helping to improve insulin responses and reducing blood glucose levels.

Additional research is needed in at risk individuals to better understand the role of red raspberries in reducing diabetes disease risk.

Overweight and obesity are major risk factors for type-II diabetes, cardiovascular disease, and some cancers. In the U.S., more than two-thirds of adults are overweight or obese.

Raspberries have the highest fiber content compared to other berries (9 grams per cup). Dietary fiber is associated with satiety and helping to reduce food intake, which can assist with weight control.

Metabolic syndrome refers to a cluster of cardio-metabolic risk factors including abdominal obesity, high blood pressure, impaired glucose and insulin metabolism, as well as elevated triglycerides and low concentrations of high density lipoprotein (HDL) cholesterol. In addition to increasing the risk for heart disease and diabetes, the metabolic syndrome has also been linked with cognitive impairment, dementia and development of Alzheimer’s.

Studies on the role of red raspberries with respect to Alzheimer’s disease are very limited, although the association between red raspberry or its polyphenol components in reducing oxidative stress, inflammation, and improving insulin signaling can be considered promising for Alzheimer’s disease risk reduction as well slowing the aging process. Dr. Burton-Freeman suggests that the available data supports further research on the role of red raspberries in preserving brain health.