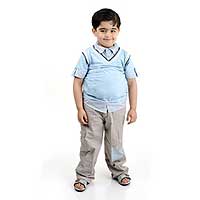 While early antibiotic use has been associated with a number of rare long-term health consequences, new research links antibiotics to one of the most important and growing public health problems worldwide — obesity. Administration of three or more courses of antibiotics before children reach an age of 2 years is associated with an increased risk of early childhood obesity.

“Antibiotics have been used to promote weight gain in livestock for several decades, and our research confirms that antibiotics have the same effect in humans,” said Frank Irving Scott, MD, MSCE, assistant professor of medicine at University of Colorado Anschutz Medical Campus, Aurora, and adjunct scholar, Center for Clinical Epidemiology and Biostatistics at the University of Pennsylvania, Philadelphia.

“Our results do not imply that antibiotics should not be used when necessary, but rather encourage both physicians and parents to think twice about antibiotic usage in infants in the absence of well-established indications.”

The researchers performed a large population-representative cohort study in the United Kingdom to assess the association between antibiotic exposure before age 2 years and obesity at age 4 years. Children with antibiotic exposure had a 1.2 percent absolute and 25 percent relative increase in the risk of early childhood obesity. Risk is strongest when considering repeat exposures to antibiotics, particularly with three or more courses.

“Our work supports the theory that antibiotics may progressively alter the composition and function of the gut microbiome, thereby predisposing children to obesity as is seen in livestock and animal models,” added Dr. Scott.

Antibiotics are prescribed during an estimated 49 million pediatric outpatient visits per year in the U.S. A large portion of these prescriptions (more than 10 million annually) are written for children without clear indication, despite increased awareness of the societal risks of antibiotic resistance, as well as other tangible risks, including dermatologic, allergic and infectious complications; inflammatory bowel disease; and autoimmune conditions.

Further research is required to assess whether these findings remain into adolescence and young adulthood, as well as to determine if early antibiotic usage leads to later-onset obesity. Research should also examine whether specific classes of antibiotics are more strongly associated with subsequent obesity.

The American Gastroenterological Association, through its Center for Gut Microbiome Research and Education, will continue to promote and share research related to antibiotics and obesity, and their relation to the gut microbiome.