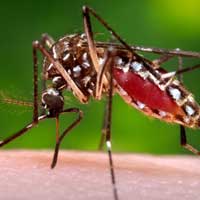 The first case of brain damage linked to the Zika virus within the United States has been reported in Hawaii. The Hawaii State Department of Health said Friday that a baby born in an Oahu hospital with microcephaly — an unusually small head and brain — had been infected with the Zika virus, which is believed to have caused the same damage in thousands of babies in Brazil in recent months.

The presence of the virus was confirmed by the Centers for Disease Control and Prevention (CDC).

Out of an abundance of caution, pregnant women advised to consider postponing travel to areas where Zika virus transmission is ongoing.

Usually, the virus causes cold-like symptoms, but for pregnant women, Zika may also be causing a birth defect called microcephaly: babies being born with small heads and severe brain damage. The disease turned up in Brazil in May 2015 and has spread quickly.

Brazil has seen cases of microcephaly skyrocket from about 200 a year to more than 3,000 last year.

The CDC, citing Brazilian health authorities, says more than 3,500 microcephaly cases were reported in Brazil between October 2015 and January 2016.

The risks are so great that some Brazilian health officials have suggested that women in high Zika-transmission areas delay having a child.

The list of countries with transmission has been steadily growing; on Saturday, Barbados reported its first cases.

A CDC epidemiologist recently predicted Zika would follow the same pattern that dengue has, with local transmission during hot weather in tropical parts of the country, including Florida, the Gulf Coast and Hawaii.