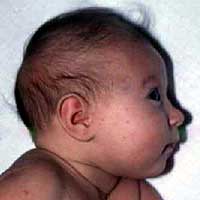 Brazilian health ministry reported a rise in the number of newborn babies with uncommonly small heads – microcephaly, and suspect that the surge is linked to an outbreak of the mosquito-borne Zika virus. The number of babies born with suspected microcephaly since October has now reached 3893.

Brazilian authorities have reported 3,893 new suspected cases of microcephaly in new-borns. Some 90% of these cases have been recorded in Brazil’s northeastern states, where the country’s Zika outbreak — the largest on record — is most pervasive.

Zika is generally mild and only causes symptoms in one in five people. It is spread by the Aedes aegypti mosquito, which also spreads dengue and chikungunya.

Forty-nine babies with suspected microcephaly have died, Brazil’s health ministry says. In five of these cases an infection with Zika virus was found.

The Fiocruz research institute in Brazil says it has detected the virus in the placenta of a woman who miscarried in the first trimester of pregnancy – a step closer to establishing a clear link between the virus and the deformities affecting babies and foetuses.

Brazil is experiencing the largest known outbreak of Zika.

The US Centers for Disease Control and Prevention issued an alert last Friday advising pregnant women to consider postponing travel to Brazil and other Latin American and Caribbean countries where outbreaks of Zika have been registered.