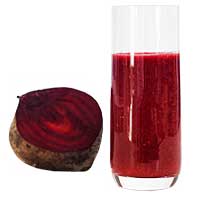 Exercise intolerance – shortness of breath and fatigue with normal amounts of exertion — is the primary symptom of HFPEF and is due partly to non-cardiac factors that reduce oxygen delivery to active skeletal muscles.

HFPEF is a recently recognized disease that reflects how the left ventricle of the heart pumps with each beat. It occurs primarily in older women and is the dominant form of heart failure, as well as the most rapidly increasing cardiovascular disorder in this country.

The Wake Forest Baptist researchers enrolled 19 people in a double-blinded, randomized safety study to determine which was better at improving exercise intolerance, a single dose or a daily dose of the juice given over multiple days. The beetroot juice used is produced by a company in the United Kingdom and is not commercially available in this country.

First, aerobic endurance and blood pressure were measured after the participants received either a single dose of beetroot juice or a placebo.

The researchers then administered a daily dose of beetroot juice to all 19 patients for an average of seven days, and measured endurance and blood pressure again. The juice dose in the study was equivalent to 2.4 ounces containing approximately 6 millimoles of inorganic nitrate.

The team found that the daily dosing of beetroot juice improved aerobic endurance by 24 percent after one week, as compared to the single dose which produced no improvement. Aerobic endurance was measured as cycling time to exhaustion at a fixed workload lower than their maximum.

Another finding was that consumption of the juice significantly reduced resting systolic blood pressure in both the single and daily dose groups by 5 to 10 mmHg.

No adverse events were associated with either intervention.

“Although larger trials need to be conducted, these initial findings suggest that one week of daily beetroot juice could be a potential therapeutic option to improve aerobic endurance in patients with HFPEF, which has implications for improving everyday activities and quality of life,” said Dalane Kitzman, M.D., professor of internal medicine at Wake Forest Baptist and senior author of the study.

This work was partially supported by NIH grants.