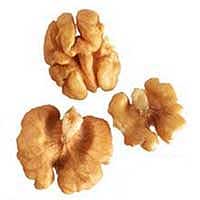 A diet containing unsaturated fats, such as those found in walnuts and olive oil, has similar weight loss effects as a lower fat, higher-carbohydrate diet. The research led by Dr. Cheryl Rock of the University of California, San Diego School of Medicine.

Researchers also showed that a diet containing walnuts, which are primarily comprised of polyunsaturated fats, positively impacts heart health markers, such as cholesterol.

“One of the surprising findings of this study was that even though walnuts are higher in fat and calories, the walnut-rich diet was associated with the same degree of weight loss as a lower fat diet,” said Dr. Rock. “Considering the results of this study, as well as previous walnut research on heart health and weight, there’s something to be said for eating a handful of walnuts a day.”

2) a lower carbohydrate and higher fat diet, or

Those prescribed a walnut-rich diet consumed 1.5 ounces per day. Looking at data from the first six months of the intervention, this study found that the average weight loss was nearly eight percent of initial weight for all groups.

The walnut-rich diet participants saw comparable weight loss to the other study groups; however, they exhibited the most improvement in lipid levels, especially in those who are insulin-resistant. In addition to a significant decrease in LDL cholesterol, the walnut participants achieved a greater increase in HDL cholesterol as compared to the other diet groups.

Whereas the lower carbohydrate and higher fat diet participants were encouraged to consume foods higher in monounsaturated fats, the walnut-rich diet provided more polyunsaturated fats. Walnuts are the only nut in which the fat is primarily polyunsaturated fat (13g/oz), including a significant amount of alpha-linolenic acid (ALA), the plant-derived form of omega-3 fatty acids (2.5g/oz).

There are some study limitations that should be considered. The sample only included women, so these results may not be generalizable to men. Although 245 participants were enrolled, the sample sizes for comparisons were reduced because the participants were divided into subgroups. In addition, there is a lack of detailed information about dietary intake and adherence to the diets. Considering the weight loss that was seen in participants, it seems that most were adhering to a reduced calorie diet.

“In addition to these findings, we hope to explore the effect of walnuts on satiety, as we believe satiety is a critical factor for maintaining weight loss,” said Dr. Rock.