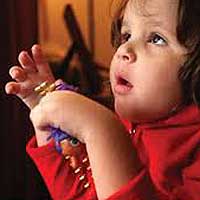 MMR vaccine is not found associated with an increased risk of autism spectrum disorders (ASD), revealed by researchers in a study in the JAMA, a theme issue on child health.

In a study that included approximately 95,000 children with older siblings, receipt of the measles-mumps-rubella (MMR) vaccine was not associated with an increased risk of autism spectrum disorders (ASD), regardless of whether older siblings had ASD, findings that indicate no harmful association between receipt of MMR vaccine and ASD even among children already at higher risk for ASD.

Although a substantial body of research over the last 15 years has found no link between the MMR vaccine and ASD, parents and others continue to associate the vaccine with ASD. Surveys of parents who have children with ASD suggest that many believe the MMR vaccine was a contributing cause. This belief, combined with knowing that younger siblings of children with ASD are already at higher genetic risk for ASD compared with the general population, might prompt these parents to avoid vaccinating their younger children.

Anjali Jain, M.D., of the Lewin Group, Falls Church, Va., and colleagues examined ASD occurrence by MMR vaccine status in a large sample of U.S. children who have older siblings with and without ASD. The researchers used an administrative claims database associated with a large commercial health plan. Participants included children continuously enrolled in the health plan from birth to at least 5 years of age during 2001-2012 who also had an older sibling continuously enrolled for at least 6 months between 1997 and 2012.

Of the 95,727 children included in the study, 1,929 (2.01 percent) had an older sibling with ASD. Overall, 994 (1.04 percent) children in the cohort had ASD diagnosed during follow-up. Among those who had an older sibling with ASD, 134 (6.9 percent) were diagnosed with ASD, compared with 860 (0.9 percent) diagnosed with ASD among those with siblings without ASD. The MMR vaccination rate (l dose or more) for the children with unaffected siblings (siblings without ASD) was 84 percent (n = 78,564) at 2 years and 92 percent (n = 86,063) at age 5 years. In contrast, the MMR vaccination rates for children with older siblings with ASD were lower (73 percent at age 2 years and 86 percent at age 5 years). Analysis of the data indicated that MMR vaccine receipt was not associated with an increased risk of ASD at any age.

“Consistent with studies in other populations, we observed no association between MMR vaccination and increased ASD risk among privately insured children. We also found no evidence that receipt of either 1 or 2 doses of MMR vaccination was associated with an increased risk of ASD among children who had older siblings with ASD. As the prevalence of diagnosed ASD increases, so does the number of children who have siblings diagnosed with ASD, a group of children who are particularly important as they were undervaccinated in our observations as well as in previous reports,” the authors write.