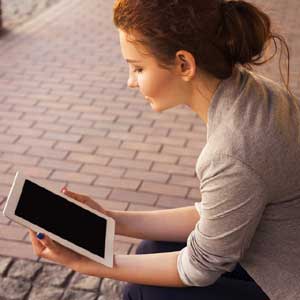 Screen time from computers, phones, tablet computers, video games, TV and other screen-based devices is associated with an increased amount of sedentary behavior in children and teens, according to a new scientific statement released by the American Heart Association and published in its journal Circulation.

Sedentary behaviors include sitting, reclining or laying down while awake — activities which exert little physical energy – and contribute to overweight and obesity in children and teens.

American Heart Association scientific statements are developed by a panel of experts who review existing scientific literature and evidence to provide an overview of a topic related to cardiovascular disease or stroke.

In this review, the writing group found that the available scientific literature is based almost entirely on self-reported screen time, with very few breaking down the type of device or the context in which it is used, which means that the studies are not designed to prove cause and effect.

The writing group determined that over the last twenty years, TV viewing by children and adolescents has declined but the recreational use of other screen-based devices, such as smart phones, tablet computers and others has resulted in a net increase in screen time overall.

Current estimates are that 8- to 18-year-olds spend more than 7 hours using screens daily.

“Still, the available evidence is not encouraging: overall screen time seems to be increasing — if portable devices are allowing for more mobility, this has not reduced overall sedentary time nor risk of obesity,” according to Tracie A. Barnett, Ph.D., a researcher at the INRS-Institut Armand Frappier and Sainte-Justine University Hospital Research Center, in Montreal, Canada, and the chair of the writing group.

“Although the mechanisms linking screen time to obesity are not entirely clear, there are real concerns that screens influence eating behaviors, possibly because children ‘tune out’ and don’t notice when they are full when eating in front of a screen.

There is also evidence that screens are disrupting sleep quality, which can also increase the risk of obesity,” Barnett said.

The message to parents and children is to take steps to limit screen time.

“We want to reinforce the American Heart Association’s long-standing recommendation for children and teens to get no more than 1-2 hours of recreational screen time daily.

Given that most youth already far exceed these limits, it is especially important for parents to be vigilant about their child’s screen time, including phones.” Barnett said.

Parents can help their children reduce screen time by setting a good example with their own screen use and by establishing screen time regulations.

According to Barnett, more research is needed because the patterns of screen-based media use and their long-term effects on children and teens are not yet known.

In addition, the authors report that not much is known about how to help youth be less sedentary and the appeal of screens is making this an even greater challenge.

Future research should focus on how to achieve greater balance.

Detailed information on the overall impact of today’s sedentary pursuits – especially with respect to screen-based devices – is needed, Barnett said.