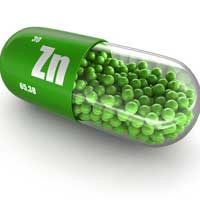 The immune system weakens as the body ages, making older adults more susceptible to infections. Low levels of zinc impair immunity, particularly in older adults. A research team set out to determine if it was feasible to increase serum zinc concentrations in older adults in nursing homes who were zinc-deficient.

“Our previous work showed that 30 percent of nursing home residents have low serum zinc levels and those with low serum zinc levels had a significantly higher incidence of pneumonia and morbidity from it. Our new finding that serum zinc levels can be improved in older adults with zinc supplementation and that this is associated with enhancement of T-cell numbers and function strongly suggests that ensuring adequate zinc consumption by older adults could have a significant impact on reducing the incidence of and morbidity from infection, which is a major public health problem in older adults,” said the study’s lead author, Simin Nikbin Meydani, D.V.M., Ph.D., the director of the Jean Mayer USDA Human Nutrition Research Center on Aging (HNRCA) at Tufts University in Boston, and senior scientist and director of its Nutritional Immunology Laboratory.

Participants were given zinc supplements or a placebo for three months.

A serum-level of 70 micrograms per deciliter was used as the cut-off standard for adequate serum zinc level and measuring improvement from supplementation.

The function of the immune response was assessed by determining the immune cell profile and function.

In addition to serum zinc concentrations, the researchers found that zinc supplementation improved the function of T-cells as determined by their ability to proliferate in response to stimuli that mimicked infection. Furthermore, they saw a positive correlation between serum zinc levels and the number and function of T-cells. This effect of zinc was attributed to increasing the number of T-cells rather than enhancing the function of each T-cell. At the end of three months, researchers found that:

–    The increase of serum zinc rose higher in the treatment group, at a rate of 16 percent, compared to those in the control group, which rose at a rate of 0.7 percent.

–    For those in the treatment group who were moderately zinc-sufficient at baseline, their serum zinc levels exceeded the cut-off standard.

–    Participants in the treatment group whose serum levels were measured as substantially zinc-deficient at baseline did not experience an increase to normal levels during the trial.

“Having a positive response to zinc supplementation may take some time in people who have been highly zinc deficient. We need to better understand how much supplementation is needed for certain people, and for how long a period, so that more refined recommendations can be made,” added first author Junaidah B. Barnett, M.C.H. (N), Ph.D., scientist in the Nutritional Immunology Laboratory at the HNRCA.

“It is worth noting that zinc deficiency is not just a problem in nursing home residents; it also exists in non-institutionalized older adults,” Meydani continued. “On average, zinc supplementation measurably improved serum zinc levels in these older adults, with most participants achieving serum zinc levels considered to be adequate.”

Zinc is found in a wide variety of foods, including oysters, pork, red meat, poultry, seafood, and fortified breakfast cereals.

Zinc is also found in beans, nuts, whole grains, cucumber peel, and dairy products and is common in multi-vitamins.

The Office of Dietary Supplements of the National Institutes of Health notes that zinc deficiency is rare in North America, but that some groups of people are more likely to have trouble getting enough zinc, including those with digestive disorders and vegetarians.

Too much zinc (the upper limit for adults is 40 mg/day) can be harmful.

Some researchers suspect, however, the older adults do not absorb or use zinc as efficiently as others.

Their work appears today in The American Journal of Clinical Nutrition.