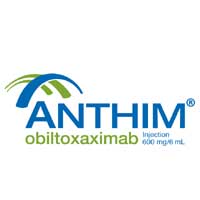 Inhalational anthrax is a rare disease that can occur after exposure to infected animals or contaminated animal products, or as a result of an intentional release of anthrax spores.

Inhalational anthrax is caused by breathing in the spores of the bacterium Bacillus anthracis. When inhaled, the anthrax bacteria replicate in the body and produce toxins that can cause massive and irreversible tissue injury and death. Anthrax is a potential bioterrorism threat because the spores are resistant to destruction and can be spread by release in the air.

Anthim is a monoclonal antibody that neutralizes toxins produced by B. anthracis. Anthim was approved under the FDA’s Animal Rule, which allows efficacy findings from adequate and well-controlled animal studies to support FDA approval when it is not feasible or ethical to conduct efficacy trials in humans.

Anthim’s effectiveness for treatment and prophylaxis of inhalational anthrax was demonstrated in studies conducted in animals based on survival at the end of the studies. More animals treated with Anthim lived compared to animals treated with placebo. Anthim administered in combination with antibacterial drugs resulted in higher survival outcomes than antibacterial therapy alone.

The safety of Anthim was evaluated in 320 healthy human volunteers.

Anthim carries a Boxed Warning alerting patients and health care providers that the drug can cause allergic reactions (hypersensitivity), including a severe reaction called anaphylaxis.

Anthim should be administered in settings where patients can be monitored and treated for anaphylaxis. However, given that anthrax is a very serious and often deadly condition, the benefit of Anthim for treating anthrax is expected to outweigh this risk.

Anthim was developed by Elusys Therapeutics, Inc. of Pine Brook, New Jersey, in conjunction with the U.S. Department of Health and Human Services’ Biomedical Advanced Research and Development Authority.

Depression among US young adults linked to social media use