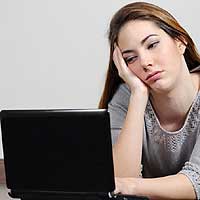 The more time young adults use social media, the more likely they are to be depressed, according to new research from the University of Pittsburgh School of Medicine. This was the first large, nationally representative study to examine associations between use of a broad range of social media outlets and depression.

“Because social media has become such an integrated component of human interaction, it is important for clinicians interacting with young adults to recognize the balance to be struck in encouraging potential positive use, while redirecting from problematic use,” said senior author Brian A. Primack, M.D., Ph.D., director of Pitt’s Center for Research on Media, Technology and Health.

In 2014, Dr. Primack and his colleagues sampled 1,787 U.S. adults ages 19 through 32, using questionnaires to determine social media use and an established depression assessment tool.

For example, compared with those who checked least frequently, participants who reported most frequently checking social media throughout the week had 2.7 times the likelihood of depression.

The researchers controlled for other factors that may contribute to depression, including age, sex, race, ethnicity, relationship status, living situation, household income and education level.

In addition to encouraging clinicians to ask about social media use among people who are depressed, the findings could be used as a basis for public health interventions leveraging social media.

Source: University of Pittsburgh Schools of the Health Sciences, USA.