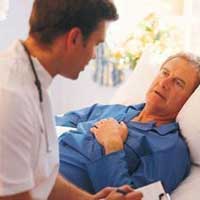 “Get up and move every 30 minutes to improve health.”

“Limiting the amount of time we spend sitting may be as important as the amount we exercise,” said lead author Dr Stephanie Prince, post-doctorate fellow in the Division of Prevention and Rehabilitation, University of Ottawa Heart Institute. “Sitting, watching TV, working at a computer and driving in a car are all sedentary behaviours and we need to take breaks from them.”

Previous research has shown that being sedentary increases the risk of cardiovascular disease but until now its effect on patients with established heart disease was unknown.

The current study investigated levels of sedentary behaviour and the effect on health in 278 patients with coronary artery disease. The patients had been through a cardiac rehabilitation programme which taught them how to improve their levels of exercise in the long term.

Patients wore an activity monitor during their waking hours for nine days. The monitors allowed the researchers to measure how long patients spent being sedentary, or doing light, moderate or vigorous levels of physical activity.

The researchers also assessed various markers of health including body mass index (BMI, in kg/m2) and cardiorespiratory fitness. Next they looked at whether the amount of time a person spent being sedentary (which was mainly sitting) was related to these markers of health.

The researchers found that patients with coronary artery disease spent an average of eight hours each day being sedentary. “This was surprising given that they had taken classes on how to exercise more,” said Dr Prince. “We assumed they would be less sedentary but they spent the majority of their day sitting.”

Men spent more time sitting than women – an average of one hour more each day. This was primarily because women tended to do more light intensity movement – things like light housework, walking to the end of the drive, or running errands.

Dr Prince said: “Women with coronary artery disease spend less time sitting for long periods but we need to do more research to understand why. There is some research from the past which suggests that at around the age of 60 men become more sedentary than women and may watch more TV.”

The researchers found that patients who sat more had a higher BMI. They also had lower cardiorespiratory fitness, which was assessed using VO2 peak. This is the maximum rate at which the heart, lungs and muscles use oxygen during an exercise test (also called aerobic capacity).

“These relationships remained even when we controlled for an individual’s age, gender or physical activity levels,” said Dr Prince. “In other words, people who sat for longer periods were heavier and less fit regardless of how much they exercised.”

Practical tips to get moving:

Dr Prince emphasized that sitting less was not a replacement for exercise. “It’s important to limit prolonged bouts of sitting and in addition to be physically active,” she said. “Sedentary time may be another area of focus for cardiac rehabilitation programmes along with exercise.”