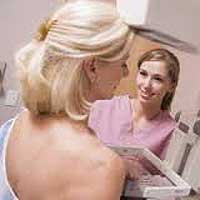 Women with a history of a false-positive mammogram result may be at increased risk of developing breast cancer for up to 10 years after the false-positive result. This is revealed by Louise M. Henderson, PhD, assistant professor of radiology at the University of North Carolina School of Medicine in the Journal – Cancer Epidemiology, Biomarkers & Prevention, a journal of the American Association for Cancer Research.

In the United States, about 67 percent of women ages 40 and older undergo screening mammography every one to two years. Over the course of 10 screening mammograms, the chance of at least one false-positive result is 61 percent for women screened annually and 42 percent for women screened every two years. Upon receiving a positive mammogram result, women are typically referred for additional imaging. Some of those women will be further referred for a breast biopsy.

Henderson and colleagues analyzed data from the Breast Cancer Surveillance Consortium (BCSC) from 1994 to 2009. The study population, which came from seven registries in different parts of the United States, included 2.2 million screening mammograms performed in 1.3 million women, ages 40 to 74 years. After the initial screening, women were tracked over 10 years, allowing researchers to evaluate the women’s breast cancer risk over time.

After adjusting for common factors that influence breast cancer risk, Henderson and colleagues found that women whose mammograms were classified as false-positive and were referred for additional imaging had a 39 percent higher risk of developing subsequent breast cancer during the 10-year follow-up period, compared with women with a true-negative result.

Women who had a false-positive result and were referred for a breast biopsy had a 76 percent increased chance of developing subsequent breast cancer compared with women with a true-negative result.

Henderson says, “Our finding that breast cancer risk remains elevated up to 10 years after the false-positive result suggests that the radiologist observed suspicious findings on mammograms that are a marker of future cancer risk. Given that the initial result is a false-positive, it is possible that the abnormal pattern, while noncancerous, is a radiographic marker associated with subsequent cancer.”

Henderson cautioned that she does not want the study findings to increase anxiety over mammograms and breast health, explaining that the increase in absolute risk with a false-positive mammogram is modest.

“We don’t want women to read this and feel worried,” she said. “We intend for our findings to be a useful tool in the context of other risk factors” such as age, race, and family history of breast cancer.

This study is highlighting the importance of radiological marker related to breast cancer diagnosis.

Heart disease patients should move every 30 minutes to improve health