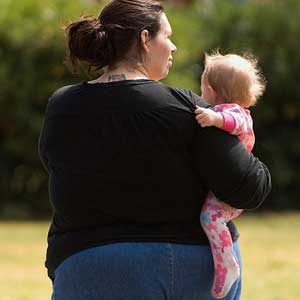 Currently, concern about the obesity epidemic is mainly focused on the health of obese women and their children, rather than the wider family. The University study has shown that moderately obese mothers can make an impact on the birth weight and diabetes risk of grandchildren, in the apparent absence of effects in their own children.

Experts say that rates of obesity are at an all-time high.

Among the associated health problems are breast and colon cancer and stroke. Moderate obesity is a Body Mass Index (BMI) between 30 and 34.9.

The study, carried out in mice, could help inform health policy on obesity.

Scientists studied moderately obese female mice fed on a diet high in fat and sugar before and during pregnancy. The mice were found to pass on the risks of obesity to the second generation of offspring, while virtually no ill effects were seen in the first generation.

Reasons why the first generation is apparently protected are not fully understood. Researchers suggest that reasons could include differences in maternal weight gain during pregnancy or specific food eaten during pregnancy.

They add that studying effects of this kind – referred to as developmental programming – in humans, could be challenging but possible.

The study, published in Endocrinology, was supported by Tommy’s, a baby charity that funds research into pregnancy health, the British Heart Foundation and the Medical Research Council.

“Given the worldwide increase in obesity, it is vital that we gain an understanding of how future generations may be affected. Future studies could look at these trends in humans but they would need to take into account genetics, environmental, social and cultural factors” said Dr Amanda Drake, University of Edinburgh Senior Clinical Research Fellow.

Nutrition during first 1000 days of every child’s life