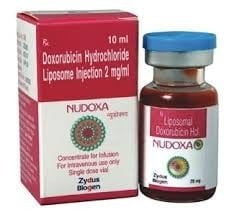 Zydus Cadila has introduced an NDDS product ‘Nudoxa’ for the treatment of various cancers. One of the critical drugs used in chemotherapy, Nudoxa heralds a new approach in cancer therapy.

With chemotherapy being a common mode of treatment in cancers, there has been a long standing need for a drug that is stable and long lasting with reduced toxicity and side effects. Nudoxa addresses this need. A patented product in India and South Africa, patents for Nudoxa have also been filed in EU, US, Japan and several countries globally.

Doxorubicin, the first generation drug, was launched in 1960s and gave a new lease of life to cancer patients with its ability to combat aggressive and malignant tumours. This DNA-interacting drug, however, was discovered to cause life-threatening side effects in the form of cardiac abnormalities.

A new variant of liposomal doxorubicin, Nudoxa with its unique drug delivery system is a breakthrough in cancer therapy as it offers the benefits of Pegylated-liposomal doxorubicin without its major side effects like the Hand Foot syndrome. Marketed by Zydus Biogen, Nudoxa is manufactured by Zydus-BSV Pharma Pvt. Ltd., the joint venture company of Zydus Cadila and Bharat Serums and Vaccines Pvt. Ltd. Founded in 2005, Zydus-BSV Pharma focuses on targeted therapies in the area of Oncology.

Nudoxa is being used as a chemotherapy drug to treat various cancers, particularly, breast cancer – the second most common type of cancer, ovarian cancer – the fifthleading cause of cancer death in women, and AIDS-related Kaposi sarcoma which develops in people who are infected with the human immunodeficiency virus (HIV).